The tech world was watching as Apple unveiled and demonstrated iOS 16, the upcoming iPhone software update, at WWDC this week. And it lived up to the pre-event hype with a raft of excellent new features, from radically improved Lock Screen customization to long-awaited editing and unsending functions in Messages.

Barring the sort of delays we saw with Universal Control last year, all of these will arrive in the fall when the public version of iOS 16 is made available to compatible iPhones across the world. (It should appear alongside the iPhone 14, give or take a week or so.)

Arguably the most exciting iOS development announced at WWDC 2022, however, will have to wait a little longer. And maybe a lot longer.

CarPlay, that platform designed to integrate your iPhone and several of its key apps with the interface of your vehicle, has got some major changes in store. Rather than being confined to a single screen, the next-gen version of CarPlay will take over the entire front panel, including speed, rpm, and fuel dials, and take control of your car’s functions such as climate control and the radio. In this year’s spirit of customization, too, you’ll be able to tweak the interface in ways that aren’t currently possible, changing colours and adding widgets to your heart’s content.

The new version of CarPlay will bring together more elements of the driving experience than ever before. You’ll be able to get at-a-glance weather and music information, and use apps for tolls, towing and refuelling. It’s not just a projection from your iPhone—the CarPlay demo was a remarkable and somewhat out-of-character reveal of a concept that’s nowhere near shipping, sandwiched between iOS 16 and watchOS 9.

Like you, my first reaction to the announcements and teaser images was excitement, principally because Apple is always at its best when given wide control of a product. When it makes both the phone and the phone’s operating system, we get the iPhone. When it has to make software alongside someone else’s we get iTunes for Windows or the ROKR phone. Apple’s design speciality is the invisible glue between functions, and it can only add value in that area if given control over a broad tranche of the user experience.

Apple doesn’t seem likely to make car hardware in the near future. Even if the Apple Car becomes a reality in the next year or so, an automobile partner will build the actual car stuff—wheels, engine, and so on. But full 360-degree control of the software inside the car is a far more appealing prospect than the current horse-designed-by-committee you get when iOS has to coexist uncomfortably with the manufacturer’s own software. I find it frustrating, for example, trying to remember the separate and conflicting naming conventions used by Skoda (in most parts of my car’s interface) and Apple (when I’m in CarPlay) and the different ways I need to navigate depending on which company is currently in control. I’d rather have Apple handle the whole lot and be able to develop proper software muscle memory about which visual or written elements are linked to which function.

It’s also exciting and cool as heck to see the entire front panel of a vehicle acting as a digital touchscreen and offering the same sort of transformative versatility we got when we switched from BlackBerry hardware keyboards to the iPhone’s soft keyboard. Depending on the context, that panel could be used for almost anything. (My own personal dream feature would be to connect it to cameras on the car’s exterior, so you could look ‘through’ the panel at the world outside. But that may be why I’m writing this article and not designing cars.)

However. However. You will note that I’ve called this the coolest and most exciting iOS announcement rather than the best or most practical because some concerns remain. Most obviously, turning the front panel of a car into a dynamic touchscreen is a far bigger step than doing so with a phone, because you don’t look at a phone when you’re doing 70 on the interstate.

Apple will need to think seriously about the dangers of distraction, and about the value of controls that can be found without looking, either because they’re always in the same place or because they’re made of plastic and you can feel them with your fingers. Haptics could help here, as to a lesser extent could the sort of Focus modes we’ve seen in recent editions of iOS: some visual features could be automatically locked out if you’re doing more than 10mph, others kick in (or drop out) when rain or low light is detected. It could work, but needs careful thought.

Still, Apple has time to make it work, because this is very much a work in progress. CarPlay 2.0 (if that’s what we’re calling it) won’t arrive with iOS 16 this fall. In fact, while Apple has boasted that it’s working with Audi, Porsche, Ford and other carmakers to implement the new tech, it’ll be towards the end of next year before we even know which cars will have it integrated. And then likely another year or two before we actually get to see it on the road.

But those of us who’ve been following the Apple Car saga are used to waiting. At least we’ve been given a clear idea of what’s in the pipeline–even if the details might need some more workshopping before they make it on the road. 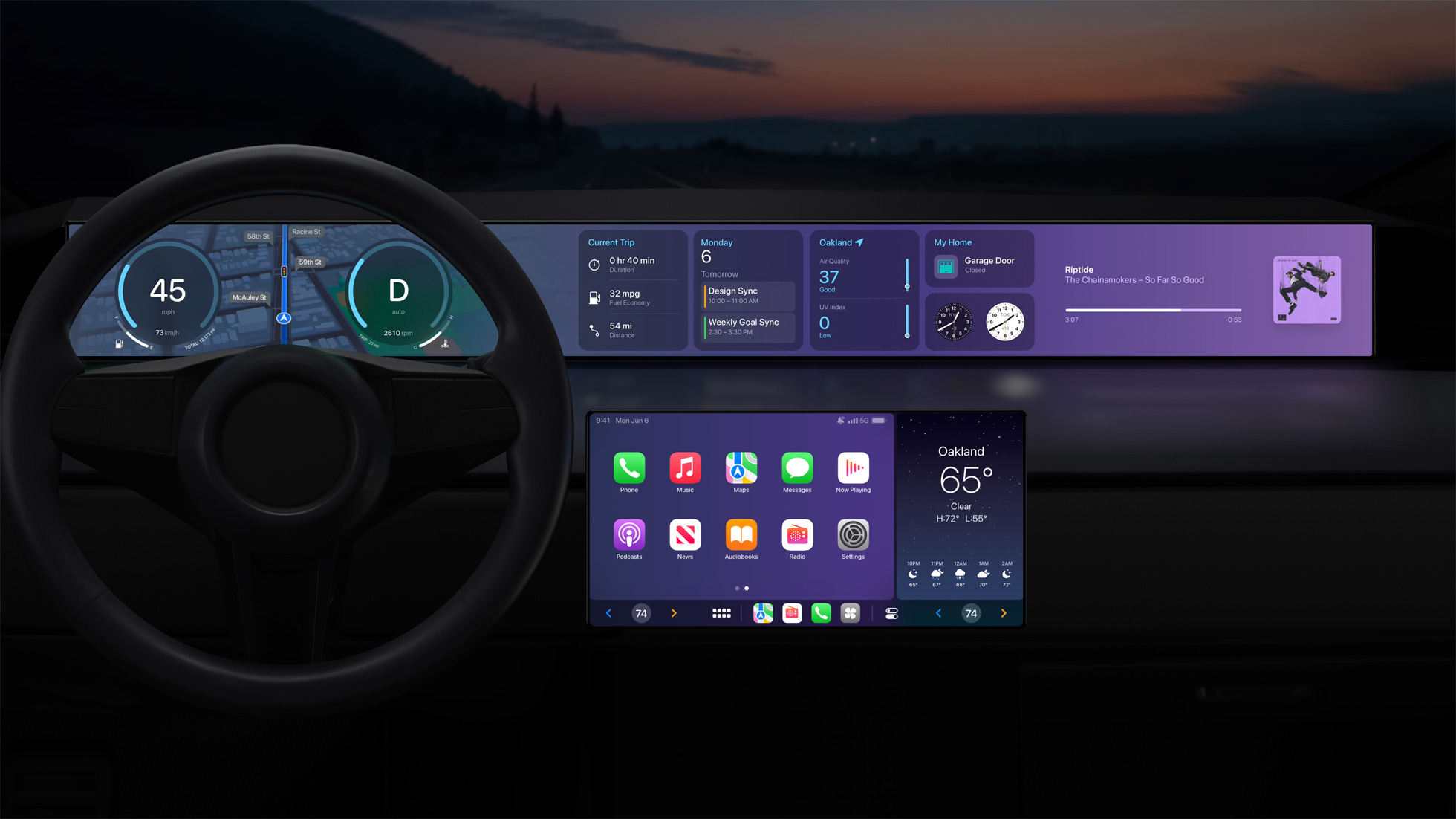