If you’re having trouble reading what’s on your Mac’s screen, here’s how to get Siri to audibly read out what’s on screen to you.

While monitors are the primary way for people to get information from their Mac, not everyone has that luxury. For those who are visually impaired, they cannot rely on what is shown on the screen as a source of information, and so require alternative methods.

Apple has a solution to this, buried in its Accessibility settings, titled Spoken Content. The feature effectively allows you to set macOS to use Siri to read out text that appears onscreen.

While intended as an accessibility feature, it can also be useful for those with complete sight, as a way to enhance their computing experience.

For example, Siri could read text aloud while looking away from the screen, or to check a typed-out speech sounds fine when actually read aloud. You can also set Siri up to speak announcements.

The majority of Spoken Content’s controls reside within the Accessibility menu.

Spoken Content is divided into four general sections, with each having its own personalization options. They cover spoken announcements, selected text, items being pointed at with the mouse, and for typing feedback.

Depending on what you need enabled, simply click the option next to the specific feature. 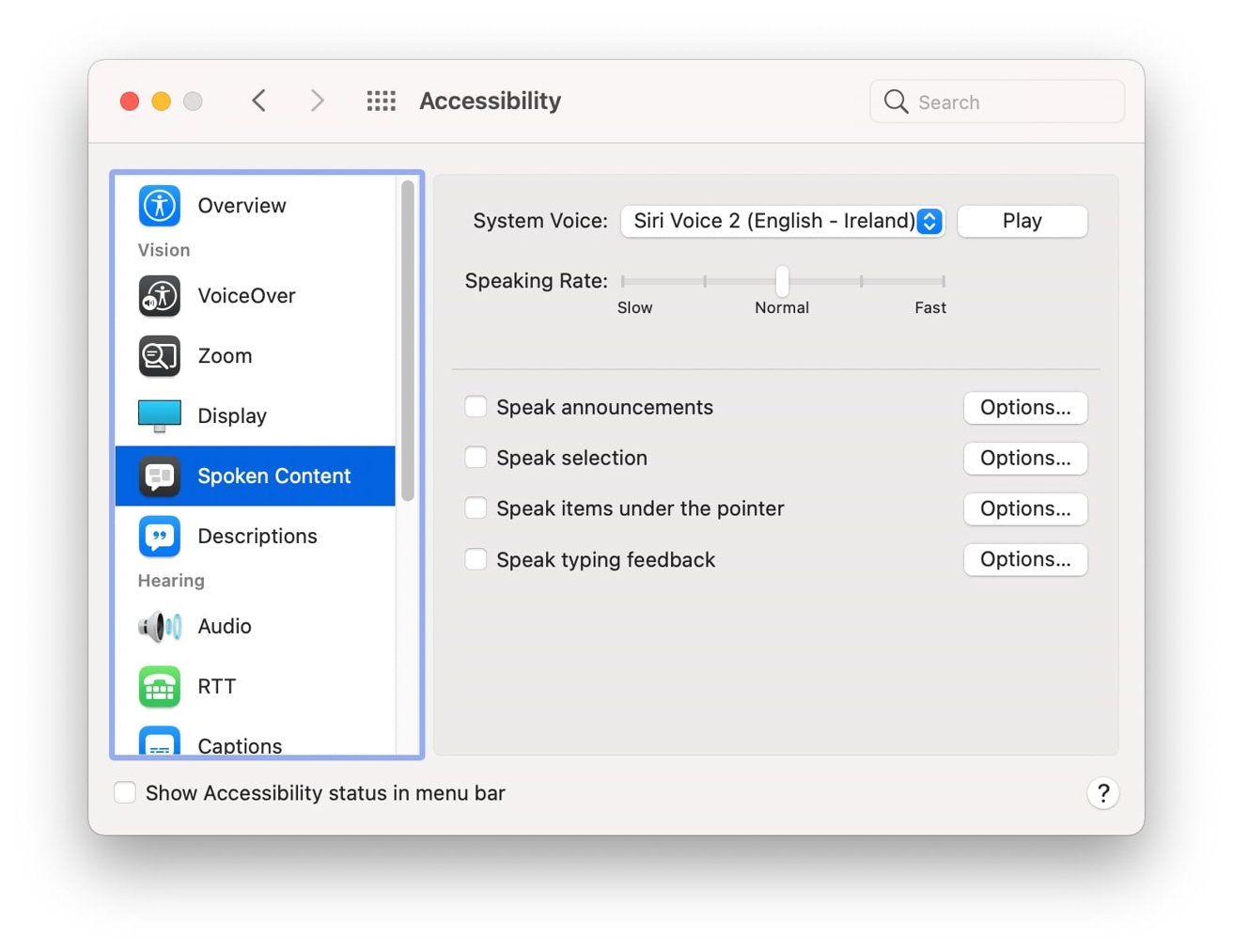 At the top of the screen are the main voice settings, where you can select the voice Siri will use, test out the voice, and affect the rate of speech. In the System Voice dropdown, you can also select to Customize the voice, allowing you to select and download new voices, including those for other languages.

Next to the System Voice dropdown, the Play button can be used to hear a sample of the speech that will be used, allowing you to change the voice or the speaking rate before you leave the menu.

If you select to enable Speak announcements, macOS will read out any notifications or alerts that pop up.

The Options button for the feature allows you to set a specific voice to be used for announcements, as well as to set a delay for when the announcement will be said after it appears on screen. 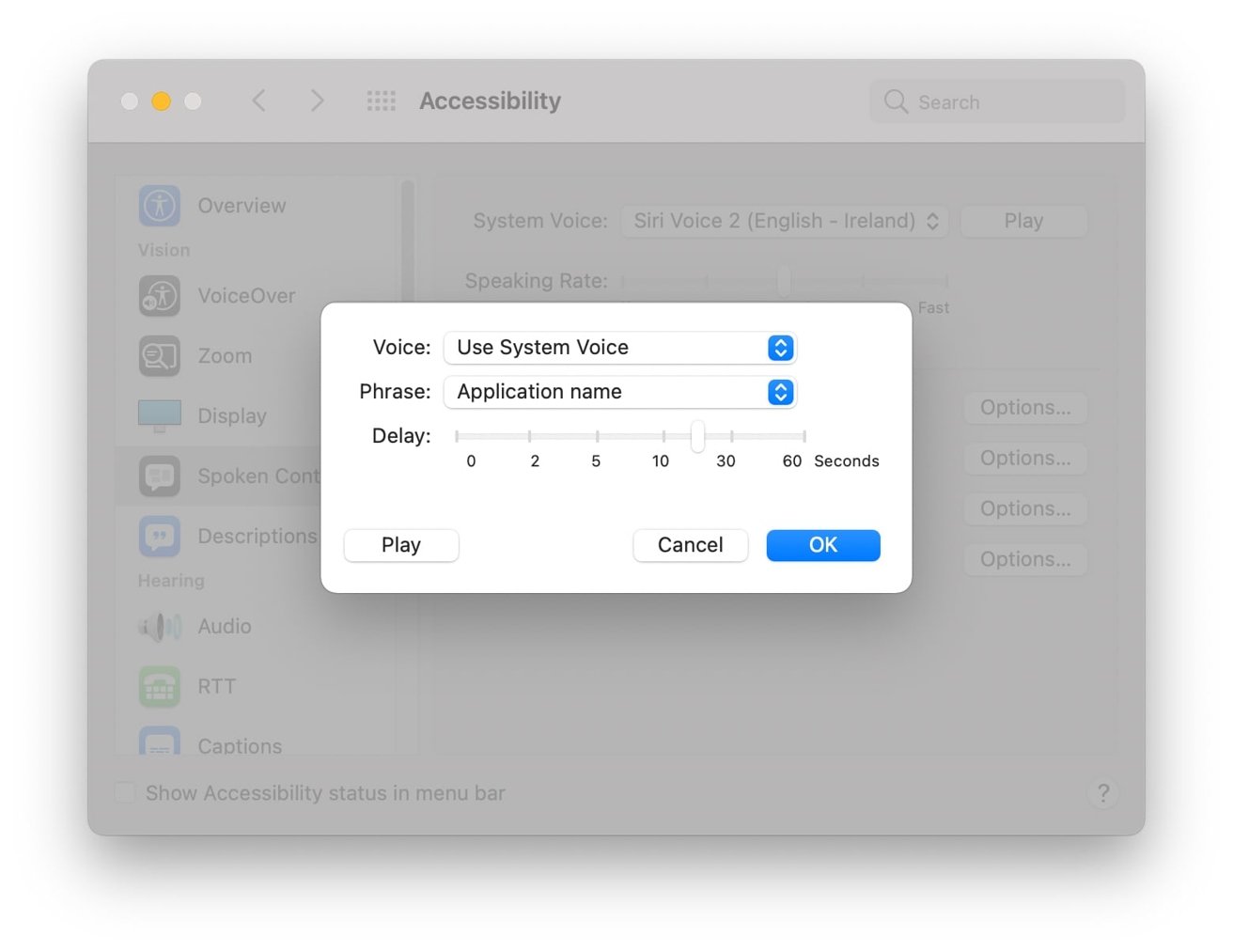 You can set system announcements to use a different voice, and to say what application an alert is from.

You can even set the phrase that can be said before the announcement itself. You can set it to be the application name, or an interruption from an editable phrase list, such as “Excuse me” and “Alert!”

Again, you are offered a play button to test out your settings.

Probably the most useful option on the list, Speak selection will read aloud any text that has been selected, after pressing a keyboard shortcut.

The Options button starts off by allowing you to set a specific keyboard shortcut for the feature. By default, it’s Option and Escape pressed together, which works quite well. 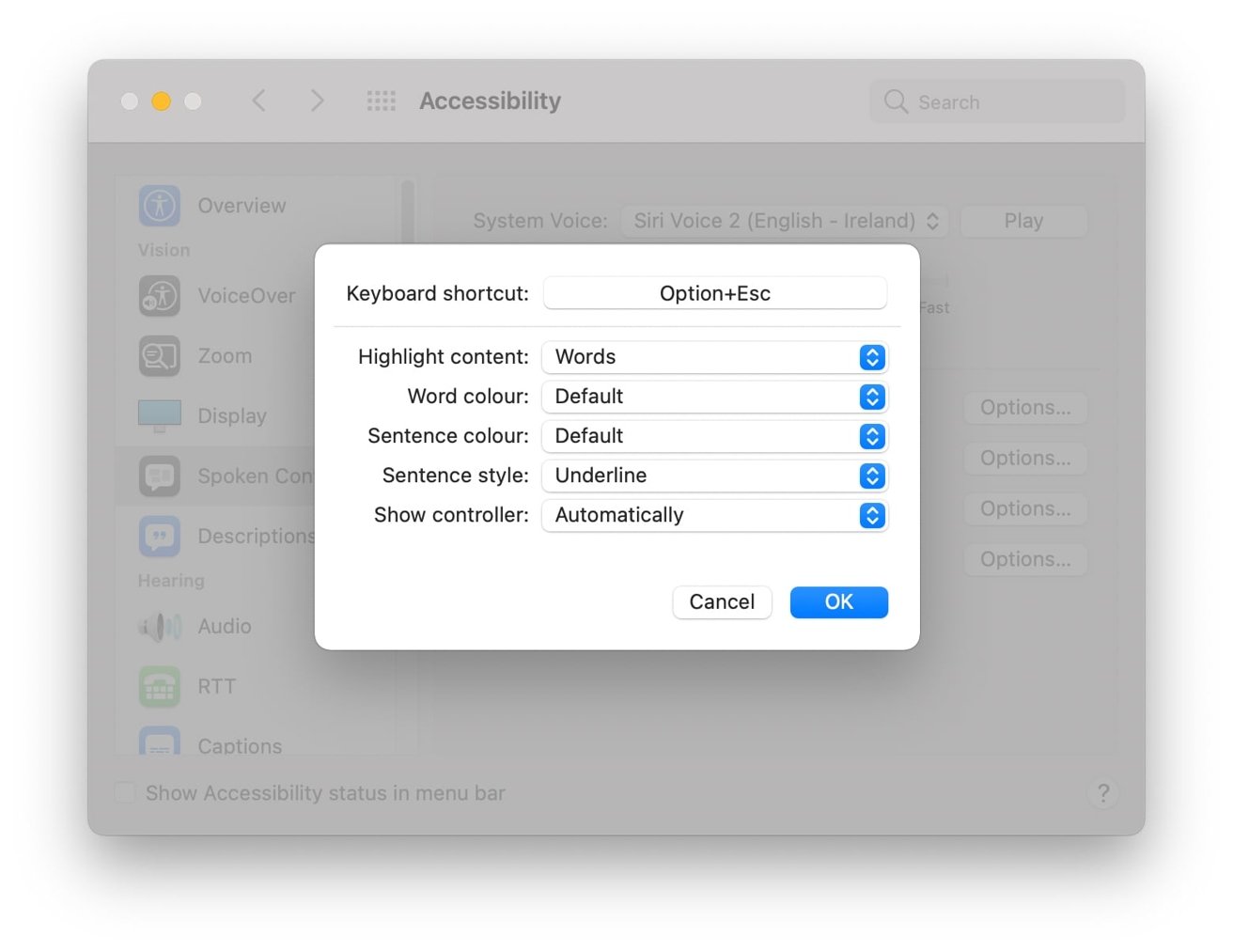 You can control how being-spoken text appears onscreen.

Highlight content refers to macOS highlighting the part of a selected stretch of text being read at that moment. This can be set to words, sentences, words and sentences, or off.

Word color relates to the Highlight content feature, to determine what color the currently-said word will be highlighted by. Sentence color is the same thing, but for the current sentence, and can be set to a different color than the word version.

An example of highlighted text and the word being spoken at that moment.

Sentence style lets you choose between the highlighting consisting of an underline or a change in background color.

Show Controller will determine whether the user will be able to see an extra controller window when text is being read aloud. The controller can be used to stop, play, and pause speech, skip forward and back in the text, and to speed up or slow down the speaking rate using the turtle and rabbit icons.

Speech of stretches of text can be controlled like a video from this panel.

Speak items under the pointer

As the name suggests, it’s a feature that will say what is currently under the pointer within macOS. This is intended to help visually impaired users identify what they are pointed at when using the mouse. 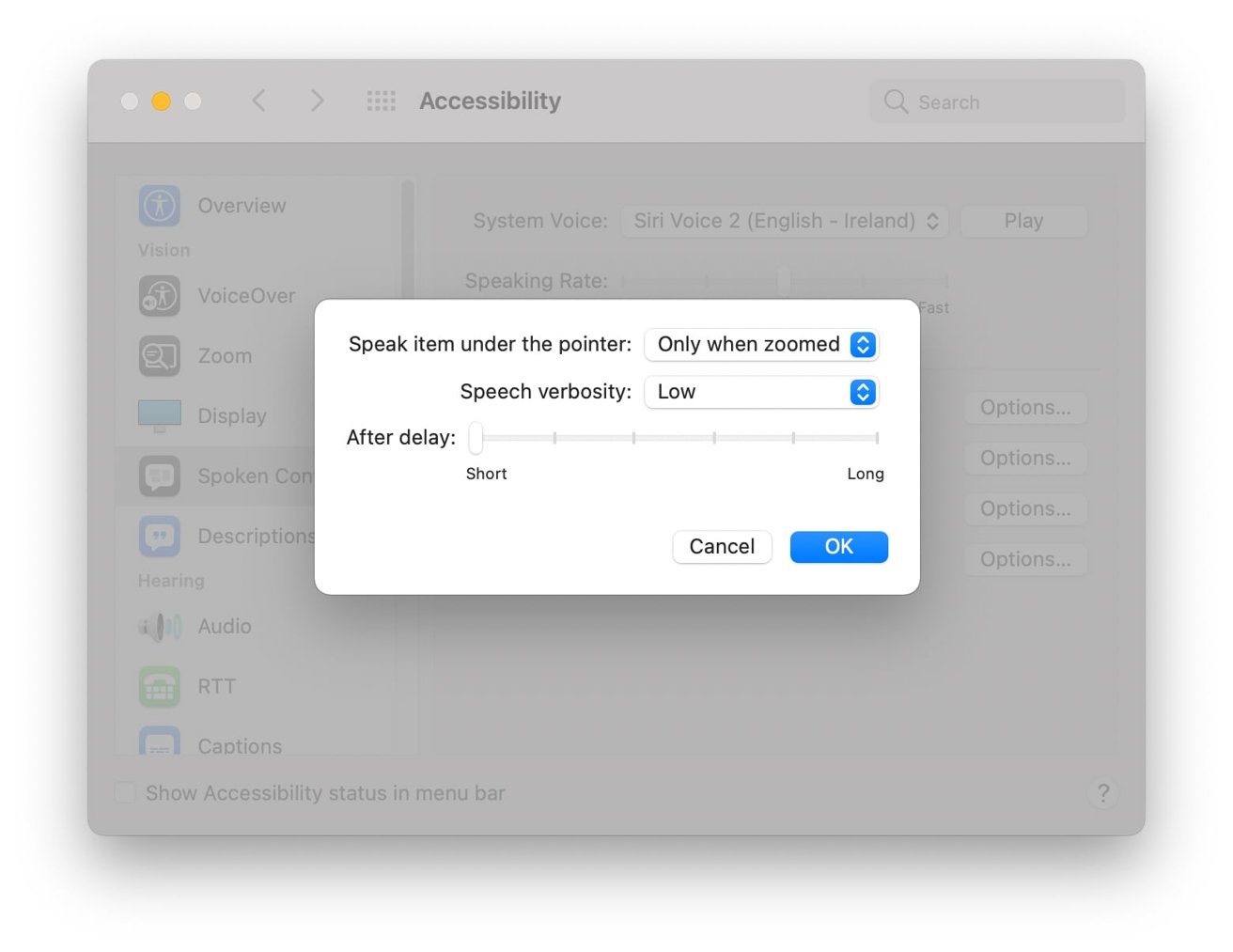 You can tell macOS to tell you what’s under the pointer all the time, or only if you’re zoomed in.

You can set the Speech verbosity to low, medium, or high, and for there to be a short or long delay before macOS says what is under the cursor.

Under Options, Echo characters will say each character on the keyboard the user has typed, including punctuation. Echo words does the same, but after the user has completed a word. 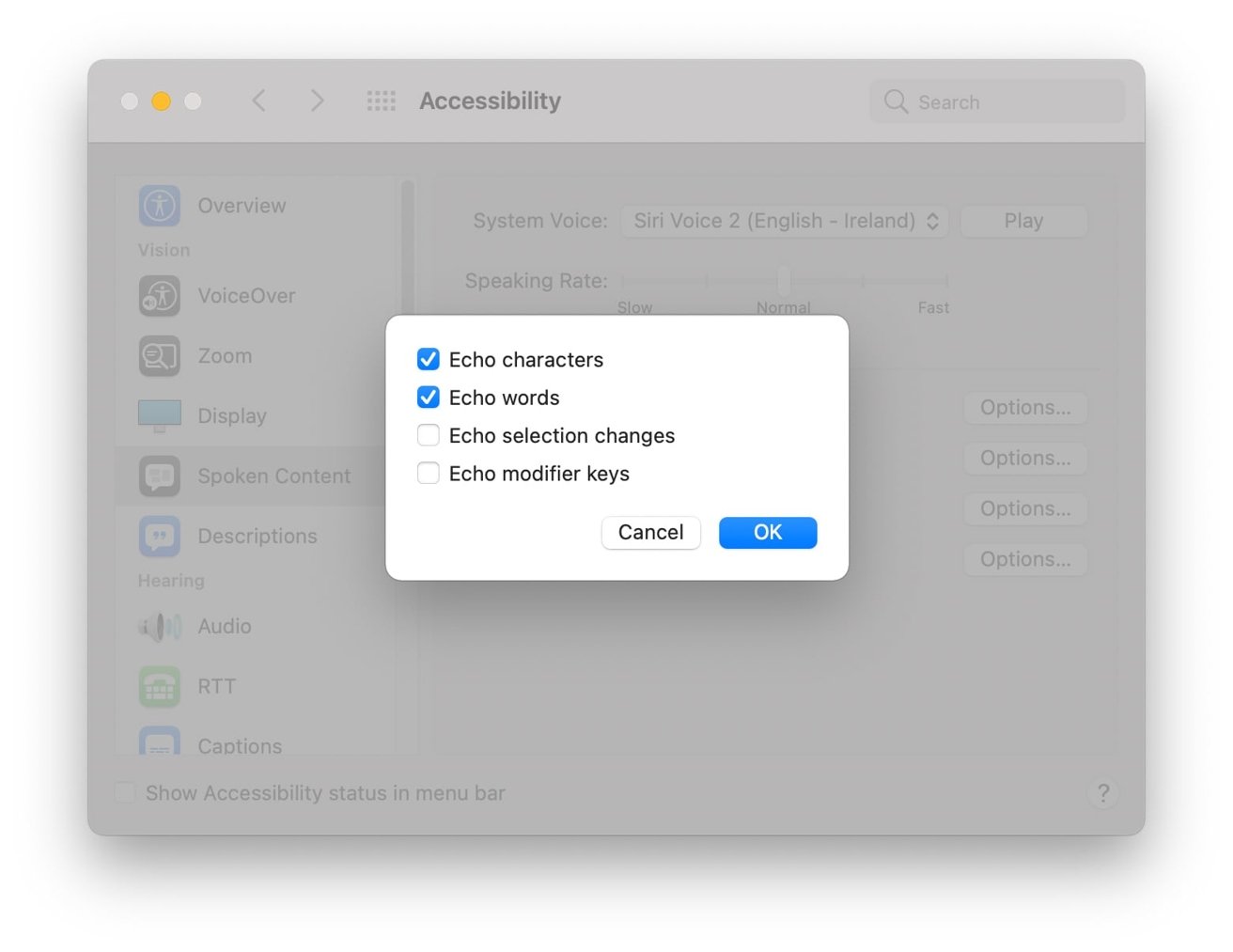 You can tell macOS to say when you’re pressing modifier keys, like Command or Shift.

Echo selection changes will make macOS speak each time you select something on screen. This can include the contents of a webpage you’ve just clicked on, or text in a document.

The Echo selection changes also reads out highlighted text, in case you don’t want to hear an entire page.

Echo modifier keys will speak out the name of each modifier key, which can help both people who cannot see the keyboard fully, and those who are not quite familiar with the keyboard’s layout. When selected, it will say “Shift,” “Control,” “Command,” and “Option” whenever they are pressed.