Apple is continuing to look into the possibility of creating a foldable iPhone, one equipped with a hinge that allows a flexible display to be bent enough for the smartphone to fold, but preventing the display from developing a crease.

The current trend in smartphones is the addition of a flexible display and movable sections, as evidenced by models from Samsung like the Fold and another rumored device. While producing a smartphone in the first place is a massive feat of engineering in the first place, creating one where the entire unit can fold is a much harder prospect, due to the display.

Even in instances where a smartphone includes a flexible display, there are limits to how far you can bend a material before it creases like paper. For displays especially, creases can make the screen appear unsightly with extra bumped sections, while creasing can fatigue the display and make it crack or break over time.

In a patent published by the US Patent and Trademark Office on Tuesday titled “Electronic devices with flexible displays and hinges,” Apple suggests the design of a mobile device that includes a flexible display within a foldable housing. At its core is the concept of allowing a flexible display to be bent sufficiently enough to make the device fold in half, but to do so in such a way that it protects the display.

Apple’s solution is that it needs to bend the display in a certain way, specifically by allowing the middle section to bow outward slightly before making the curve around. By doing so, this can allow the main sections and edges of the display away from the curved area to meet up as close as they can, while allowing the bending section to do so at an enlarged radius, minimizing stress. 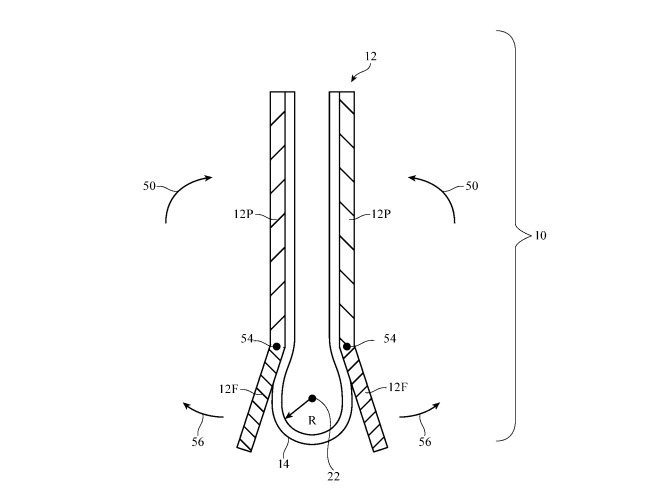 An illustration of how the screen can be folded, while allowing the bend to bow out slightly to give it a bigger radius

To accomplish this, Apple proposes a hinge mechanism that allows the screen to be supported by the main housing, flat and held in a planar state. On bending, the hinge mechanism simultaneously rotates elements of the housing around the section where the bend is located, to keep the device appearing neat and tidy.

On the inside, the hinge manages the movement of the display to bow out at the hinge, using a void section to give the screen the space it needs for the enlarged bend curve. A rack and gear arrangement can be used to maintain the distances of the housing and the display from each folded element in the static areas, as well as enforcing the desired bend radius.

The use of a void does offer up the possibility of the display not being supported properly in the bend area when the device is open, but Apple again has a solution. When unfolded, retractable flaps can be extended internally to support the display there, so finger presses won’t affect the screen’s position nor fatigue it more than necessary for normal usage. 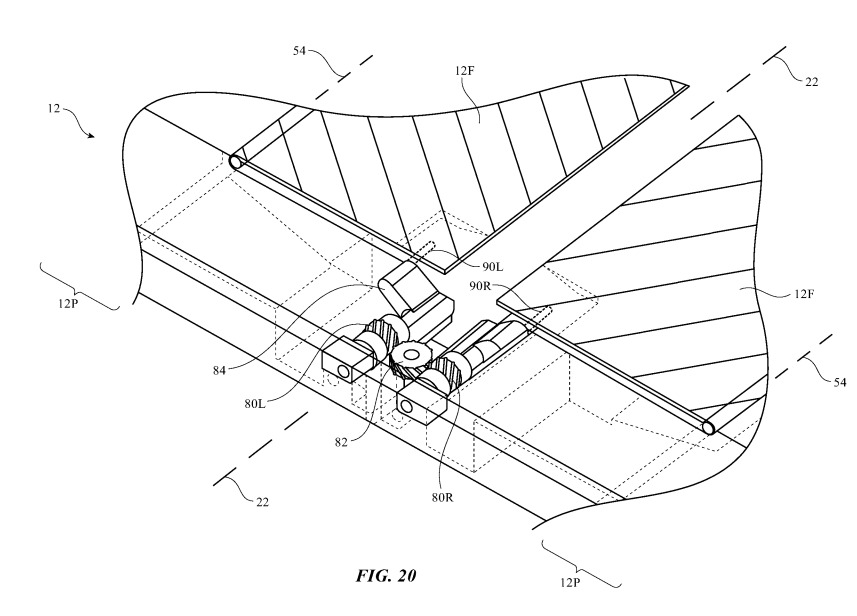 Apple files numerous patent applications on a weekly basis, but while the existence of a patent filing indicates areas of interest for the company’s research and development efforts, it does not guarantee a future product or service will use the described concepts at all.

This is far from the first time Apple has entertained the idea of using a flexible display, with many filings over the years indicating it is an area of interest for the company. In 2018, it gained a patent for the similarly-titled “Electronic devices with flexible displays” that explained how a screen can have multiple elements to assist with the fold, such as recesses in the material protecting the display layer made by grooves filled by other flexible materials.

Ai has appeared on previous folding display patent filings alongside Kim, as well as others relating to device cover attachment mechanisms and flexible battery structures. Kim was formerly a manager for iPad product design at Apple before shifting over to Tesla in 2017, where she now specializes in optics.

Heschke has a similar career trajectory, previously working as an iPad product design engineer before moving to Tesla in 2018, but is linked to a patent titled “Acoustic compensation chamber for a remotely located audio device.”

Formerly a senior manager on the iPad product design team until exiting in 2015, McClure is currently the head of Portal at Facebook. While appearing on a number of patent filings, the most closely connected listings are for curved battery designs from 2013.