We don’t have to explain why you might want AirPods. Apple’s take on true wireless earbuds revolutionized the market and have sold in massive numbers ever since. You see them in the ears of reporters, coworkers, and celebrities all the time—especially in our age of remote work and Zoom meetings.

The real question is, should you buy one now, or will you be disappointed when a new model is released in just a few weeks? Here’s what we know, and what we recommend.

Last update: March 2019
The original AirPods were released just before the holidays in December of 2016, and Apple literally couldn’t manufacture them fast enough to satisfy demand. The $159 price may seem expensive by today’s standard, but they were quite competitive with other compact wireless earbuds. Inexpensive, even! Since then, competing products have driven the price down, but Apple has held firm on its $159 price.

An improved version landed just over two years later. Still just called AirPods (not AirPods 2), and still $159, this second-generation model looked and worked the same, but featured a new H1 chip that gave it a couple of new capabilities.

First, you could trigger Siri by simply saying, “Hey Siri” instead of tapping the earbuds. Second, they connect more quickly when switching devices or taking calls. And third, their battery life when making phone calls is improved (battery life when listening to music is the same).

Second-generation AirPods are also available with a wireless charging case for $199, or you can buy the case separately for $79. It’s probably not worth it. 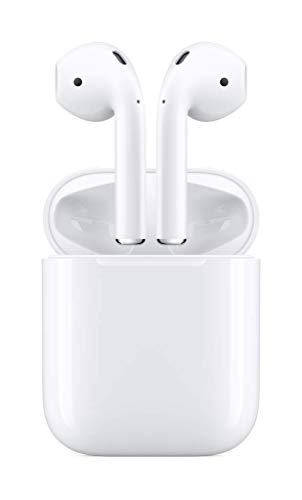 AirPods: Why you should buy

If you use an iPhone, AirPods are the fast, easy choice. Apple still sells them for $159, but you can almost always find them on sale these days for $40-50 off. At the time of this writing, they’re $119 on Amazon and we’ve seen them hit $99 before.

That’s not too much to spend if you really need some wireless earbuds now and don’t mind the thought of an improved version coming out soon. In fact, depending on how how much of an improvement the next generation is, you might still prefer buying these. The new ones are almost certainly not going to be readily available at a steep discount, so will they be worth paying more for?

AirPods: Why you should wait

We’ve been hearing rumors about so-called AirPods 3 or third-generation AirPods for about two years now. It looks like this time, maybe, the rumors are true and a new AirPods model is actually going to be released this fall. Apple’s “California Streaming” event didn’t bring an updated model as rumors, but with reports firmly suggesting that they will still arrive in September or October.

It’s likely that Apple will announce them either at the September event with the iPhone 13 and Apple Watch Series 7, or maybe at an October event, and ship them in time for the holidays. This would be the first time AirPods get an actual design update—the rumored design has shorter stems and a squatter case like the AirPods Pro, and a redesigned “pod” part that goes in your ear, though without the rubber tips of the AirPods Pro.

It may pick up a couple of features like Spatial Audio when watching video (which requires an accelerometer and gyro that is lacking in current AirPods) or enhanced Find My support, but it will probably lack the AirPods Pro’s active noise cancellation. We have no idea if they’ll sound better or have other new features.

We’re at the point where the next-generation AirPods are likely coming in the next few months. If you buy AirPods now, they’ll be “obsolete” before they’re six months old. The new generation should be a bigger leap than the second-generation model was. This time we’re looking at a nice new design with welcome changes like shorter stems, and perhaps useful new features.

The smart money is on waiting to see what Apple announces, and what the price is, before deciding if the new models are worth it or the current 2nd-gen version on sale is a better buy. If you don’t feel like taking our advice, AirPods are $159 from Apple or usually cheaper from Amazon.